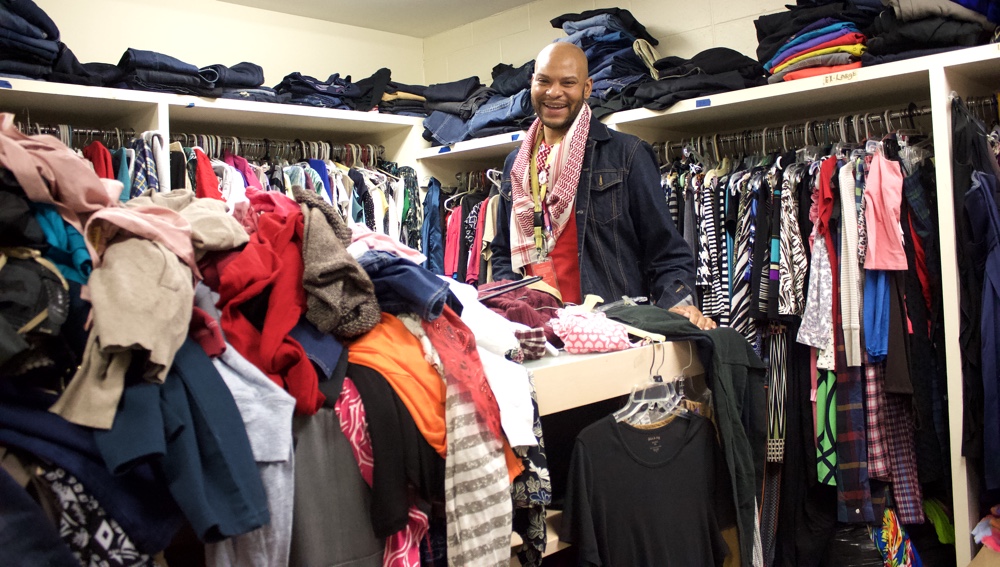 Jermaine Harmon works with the Salvation Army to make the lives of Houston’s LGBTQ homeless a little easier, one person at a time. | BY RAFA FARIHAH

If he can encourage just one homeless kid to stay in school or leave an abusive relationship, Jermaine Harmon believes he has done his job well.

“We just permanently housed [someone] at Texas Southern University,“ says Harmon. “This year, he was like ‘I think I wanna go to college,’ so we started having those preliminary conversations.”

One year later, Harmon’s mentee has completed his first year of school. He still visits YARC for Tuesday meals and checks in with old friends.

YARC works in collaboration with Tony’s Place, an LGBTQ drop-in center that provides a dependable, safe space for young people living on the streets. The center offers free hot meals, hygiene kits, backpacks and shower and laundry facilities, according to its website.

Harmon, who identifies as a black gay male, says his experiences with the Salvation Army have been positive, despite allegations the organization discriminates against the LGBTQ community.

“[Our leadership] has done an amazing job at creating an environment and a tone of acceptance,” says Harmon, “and really just living in your own truth and being who you are.”

“You’re not intentionally wanting to break the law, but it’s snowing outside…”

by Rafa Farihah | Next Generation Radio 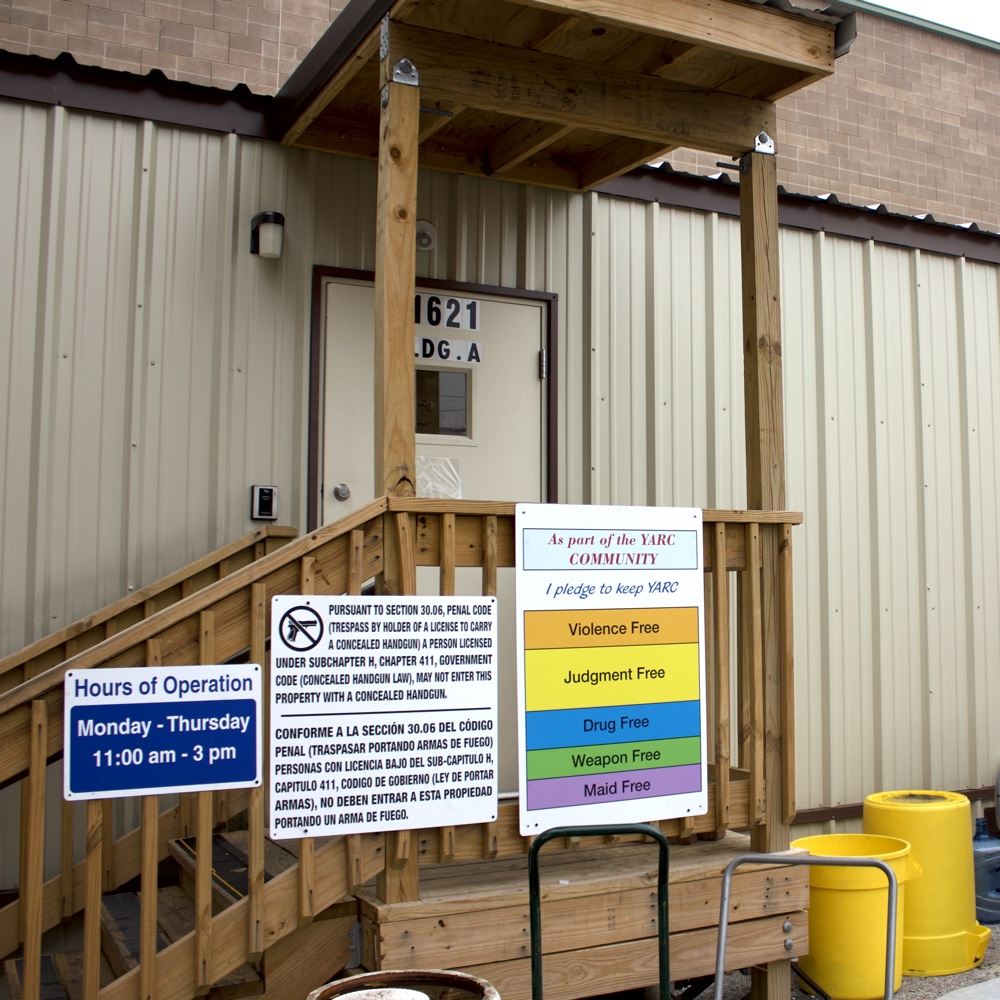 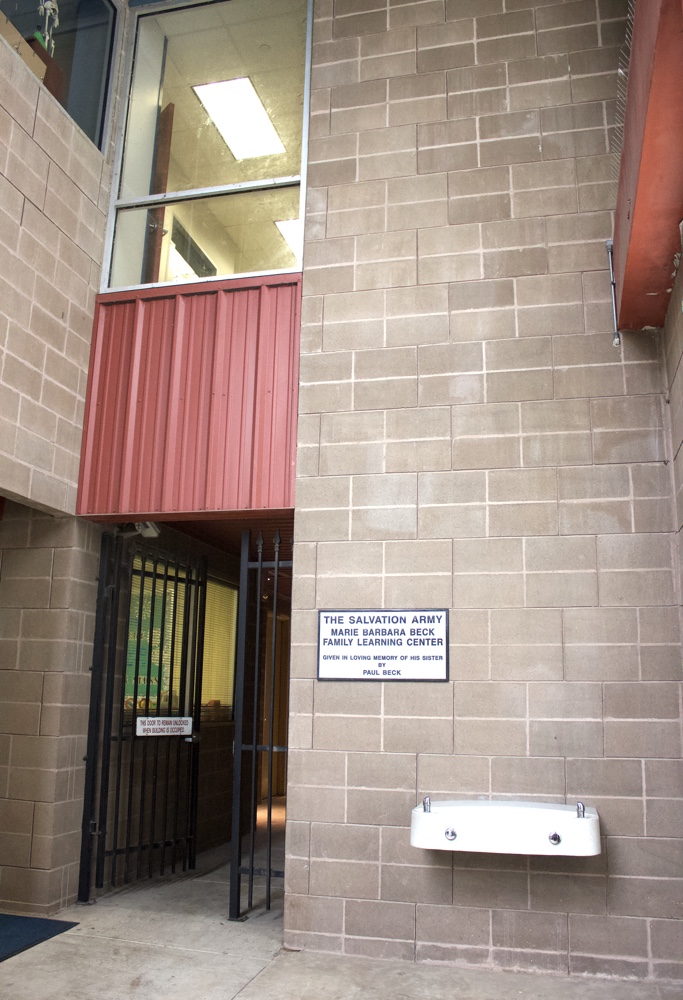 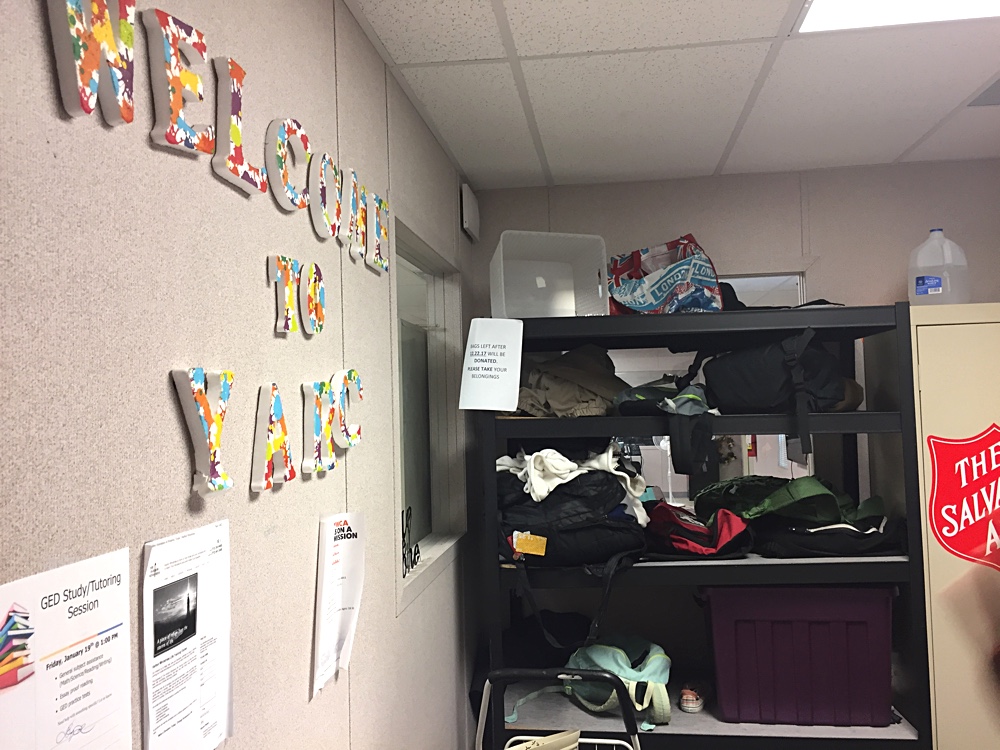 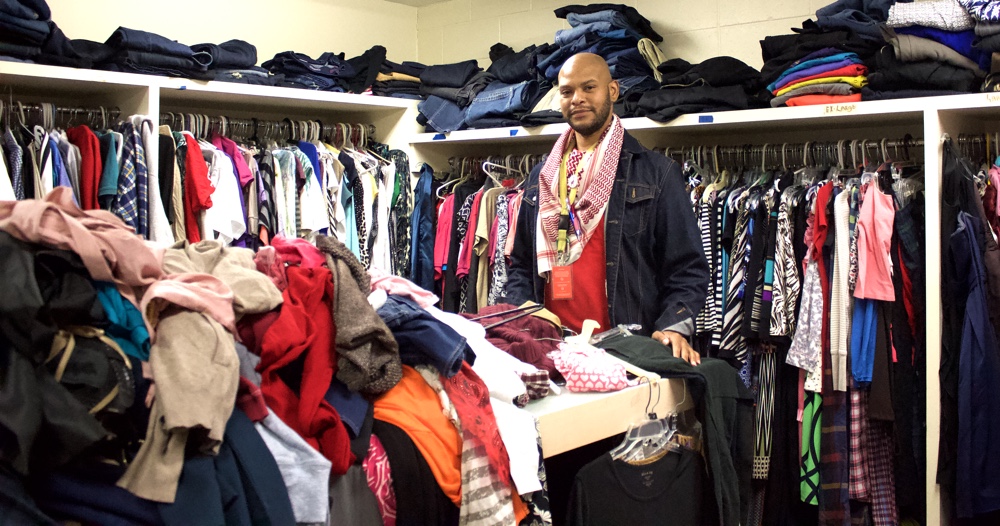 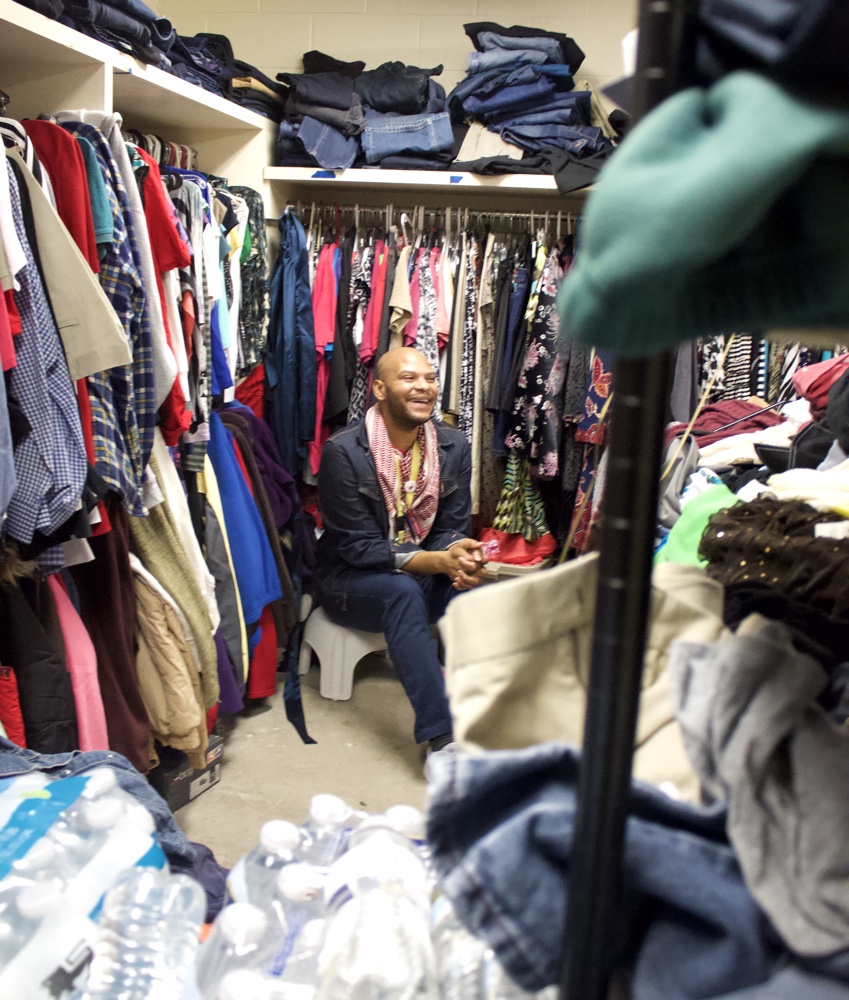 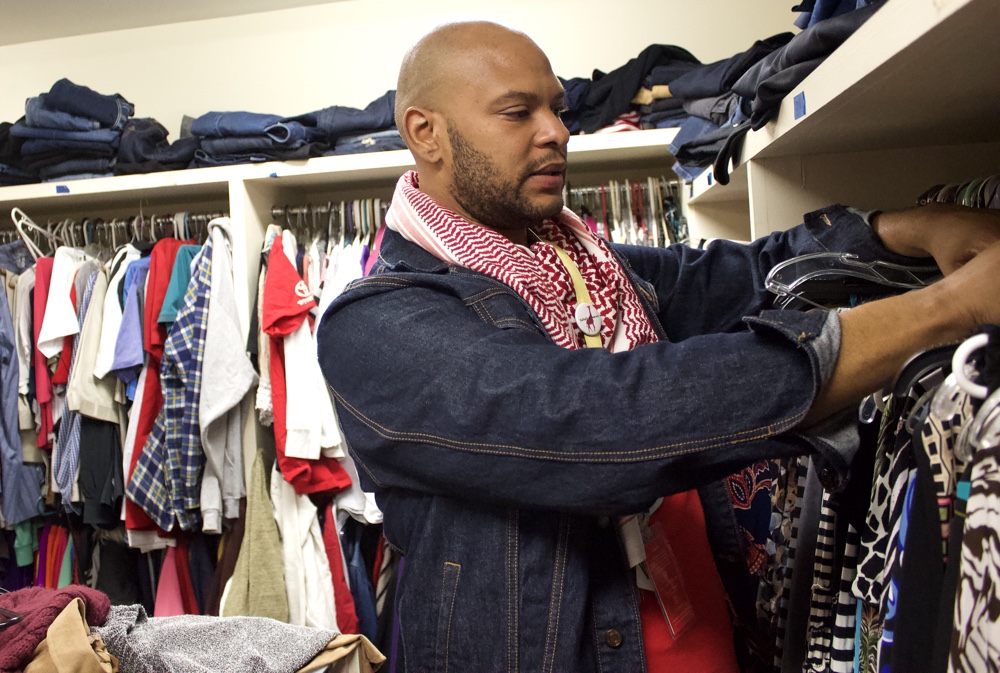 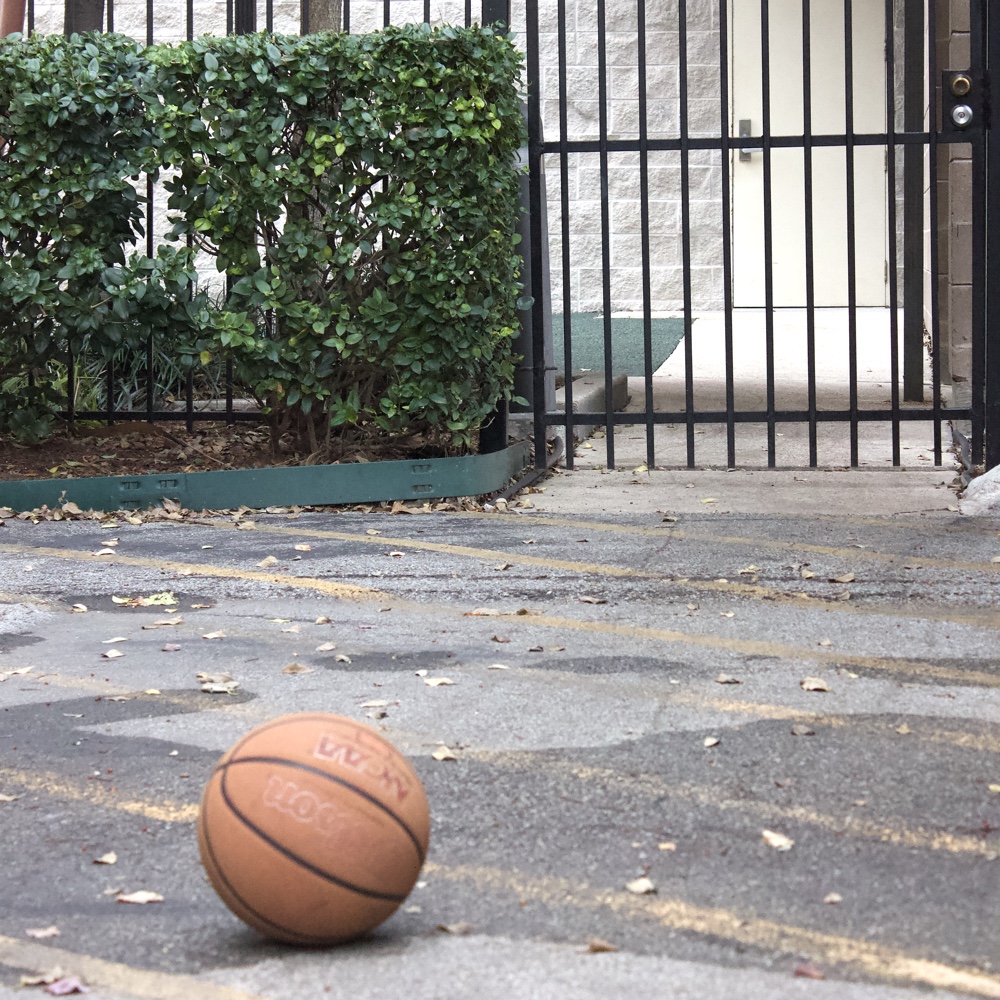 The entrance to the Salvation Army Young Adult Resource Center (YARC) and LGBTQ shelter “Tony’s Place” is the beginning of a new journey for many homeless in Houston after Harvey. (Photo: Chantal de la Rionda | Next Generation Radio)

A way to survive

According to the 2017 census, 3,412 people in Houston, Harris County and Fort Bend County qualified as homeless, which means they did not have “a fixed, regular and adequate nighttime residence.” After Hurricane Harvey was declared a major disaster, it is likely the number of displaced residents has increased.

Things have only become worse for those already in difficult living situations. Harmon says many of the members who sleep in abandoned buildings, known as ‘bandos,’ receive trespassing charges. YARC works with courts to dismiss these charges, with the understanding that after the hurricane, people are trying to find a way to survive on the streets.

“You’re not intentionally wanting to break the law, but it’s snowing outside or it’s raining outside and this window is already broken so I’m just gonna climb in and sleep on the floor,” says Harmon about the homeless experience. “I’m not hurting anyone.”

Members receive the hot meals, clothing and care they need at the drop-in center. However, Harmon mentions that some homeless youths exchange sex for a place to stay at night, also known as “survival sex.” Whatever money is earned often goes toward supporting a drug and alcohol dependency, rather than rent, says Harmon.

It’s the little successes that count

Despite the numerous cases of drug dealing and sex trade, Harmon counts the little successes in his day, whether it’s handing out bus tickets to those who need to get to job interviews, securing housing for members, or even meeting with former members.

Harmon says he’s motivated to come into work each morning by helping the homeless youths achieve their goals. “They’ll say ‘Oh, I don’t have my GED today but I’m going to work with Mr. Jermaine and the Houston Community College (HCC).”

Harvey has forced thousands of Houston residents out of their homes, but as Harmon walks through the Salvation Army halls plastered with posters of resources for the youth, he thinks back on the day after the hurricane first hit and reassures himself that it’s going to be alright.

“I noticed our common area in the YARC space had been filled with random donations and it’s like ‘Oh, where did all of this stuff come from?’” says Harmon, “The reception hall was full of people..My thought was…‘I made it. We made it.’”

Young people experience homelessness in the US every year.