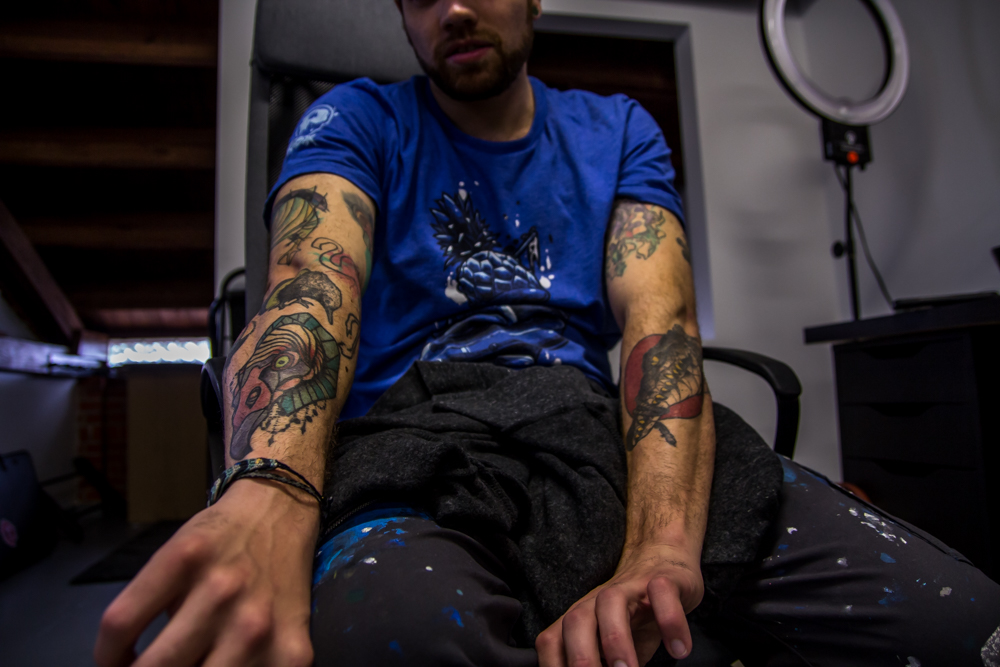 Scott Tarbox is mid-sentence when his stubby Patterdale terrier, Jinx, interrupts with a demanding bark. Tarbox attempts to restart before being cut off. He addresses the small dog, “Jinx, stop talking!” Jinx was the first of many dogs this Houston based street artist has given a home too.

“He’s taught me a lot of patience,” the bearded, earringed muralist reflects. He whistles and Tarbox’s best buddy hops up next to him, “Good boy. You want a carrot?”

Scott Tarbox is a street artist, designs enamel pins, and sell apparel–all primarily featuring cute animals with eclectic props, costumes, and stories. His artwork themes are proudly displayed on his most permanent of aesthetics, his tattoos. At his studio, Tarbox tugs his hoodie sleeves up and reveals a collage of color and image. He begins narrating his sleeves, highlighting a variety of birds in abstract illustrations. After rolling his inked arms around, he leans back in his chair and explains the tattoos he didn’t show.

One of his tattoos, hidden behind his shirt, and just below the bumps of his collar bone, is a plain, black and fading “VII.” “That’s the lil nod that I put to being grateful for getting off of heroin because, statistically, it wasn’t super likely,” Tarbox says softly.“It’s a lucky number, and I put it on a lot of my animals,” Tarbox combines a yawn with a quick ”and I put-it-on me.” 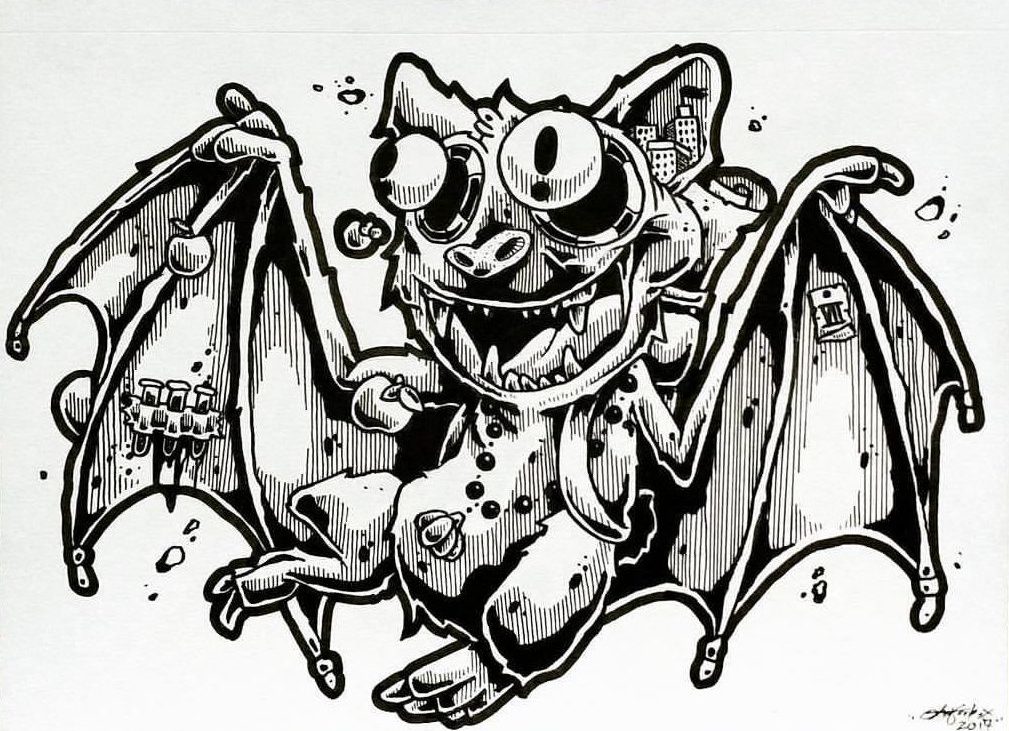 Tarbox’s ink drawing of a bat from October 2017. Tarbox’s signature “VII” is pinned to the bat’s right wing. (Instagram photo)

**Fund-raiser** While I was lucky enough to only have some minor damage to my studio, Hurricane Harvey has destroyed Houston. I was intending this release to happen in a couple of weeks as my first open edition with a surprise LE mixed in the orders. I have 150 pieces currently being manufactured and am taking pre orders on these as well as any number over that. These are soft enamel pins measuring 1.5 inches tall. The first 140 purchasers will have a shot at this blind bag LE 50. All orders after the first 140 will see a delay in shipping because they are not yet in production. 40% of my sales from this item for the next month will be going directly into relief funds and donations to help people and animals in the affected area. I will post updates of these donations to my group. If the sales reach 250 I will release a second LE 50 to be mixed in with the next batch. Limit 3 per person to special circumstance (instead of less). Link in bio Other ways to donate directly to victims of Harvey Donate directly to the Harvey Relief Fund https://ghcf.org/donate-now/ Donate to Houston Pets Alive to help affected animals http://www.houstonpetsalive.org/donate/ #tarbox #streetart #aerosol #painting #urbanart #spraypaint #1xrun #houstonart #htx #2017 #mural #acrylic #myart #newart #picoftheday #art_spotlight #artfido #artsanity #artstagram #artoftheday #instaart #artgallery #graffiti #lowbrow #juxtapoz #pin #hurricaneharvey #relieffund

Tarbox is involved with animals outside of his work as well. Over the course of 2 years, Tarbox and his girlfriend took in 7 different stray dogs. But when Harvey hit and displaced thousands of people and pets, Tarbox needed a lot of help.

To make a bigger impact, Tarbox turned to his online fanbase to raise awareness and gather donations.

He previously used this fanbase to find homes for dogs he had fostered, but this time he was distributing art, not dogs. He released an exclusive pin set and donated 40% of his art sales, to help a variety of causes following Harvey and Irma. But this time, his goal was to donate to “programs that can help the dogs,” rather than directly intervening.

“I have the luxury of being in a position where I can think about [helping animals],” he observes. “But I don’t think they’re mutually exclusive.”

Tarbox believes that if he wasn’t in such a privileged socioeconomic position, helping animals would be much less of a concern. For those who are less fortunate, he can imagine them thinking, “I don’t even have time to think about this dog because I’m scraping by.” Tarbox illustrates his point with a story about a questionably cruel homemade dog-worm cure.

However, Tarbox also faced serious financial risk with his care of animals. That is precisely why he begin donating to charities; directly rehabilitating strays had become too expensive. “It’s hard, because you want to help all of them.”

When Tarbox took us to his Houston studio, his recent success was demonstrated by the dearth of artwork. Aside from some recent arrivals, his studio was bare.

“Fortunately, I’m in the position where I’m selling my artwork as soon as I make it.” In spite of this, Tarbox recognizes the reality about financial security, “we’re a bad injury or a big economic shift” from homelessness. Tarbox described seeing a homeless man removed from the dog park, “I felt really backwards and weird. A few years ago I could have been that guy, easily.” 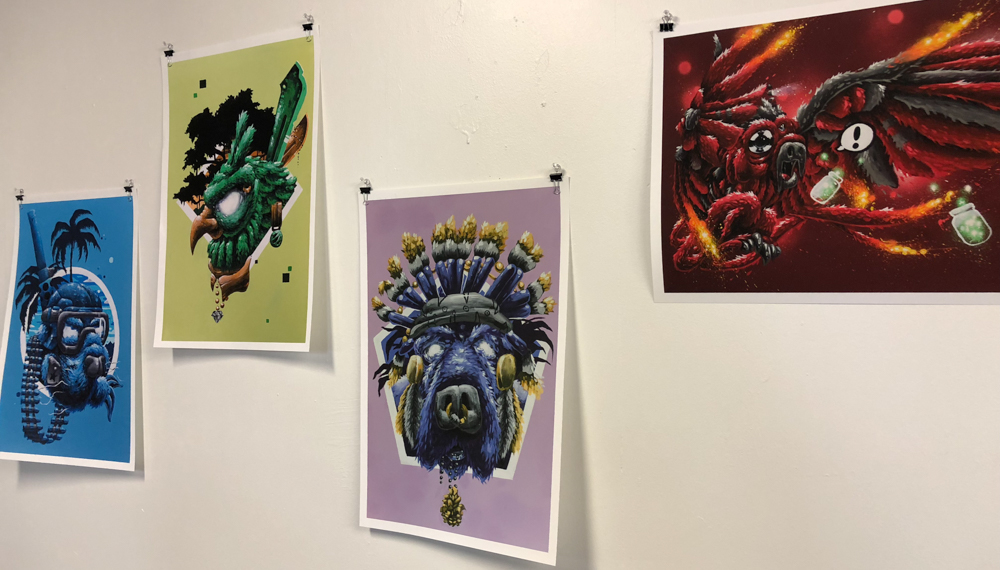